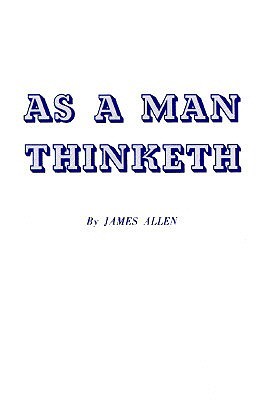 Perfect for the cold, dark, and reclusive days of winter, February offers a time to weigh and measure oneself; to be introspective and see where one is found wanting. What happened to the promises made at the beginning of the year, when you were eager to put the past in the past and start anew? Alas, January is now but a distant memory, its resolutions long forgotten for the weak-willed and soft-minded, the lazy and the gluttonous.

At least that would be the conclusion the reader would draw after perusing As A Man Thinketh by James Allen, for it is that philosophy on which the essay is based, and the overall message I gleaned. Man’s thoughts determine his circumstances; good thoughts beget good results; bad thoughts, bad results. Of course, Mr. Allen gets much more involved in his explanations and examples.

There’s a long story as to why I’m discussing his book instead of the one originally scheduled, but that will come in a later post. Suffice it to say,  it was a rapid succession of vicissitudes which put this pamphlet in my path, and I’m so grateful it did. Over the past too-many-years-to-count, I’ve been on a journey of self-awareness and have read too-many-books-to-count in the spiritual, metaphysical, inspirational, self-help, and new thought categories—so many, in fact, I’m puking Chopra and crapping Tolle for goodness’ sake!

It’s not as if my life was a train wreck, though. I’ve always felt it a good idea to practice mindfulness and delve into a better understanding of the human condition, and in turn, myself. My exploration into the thought processes which determine behavior was a result of my first real heartbreak over twenty-five years ago. Curled in a ball on the kitchen floor, phone in hand and sobbing to anyone who’d listen was not how I wanted to handle it. I think Melody Beattie’s Codependent No More was the first in a long line of self-hell spelunking into the caverns of my soul.

Over the next couple of decades, my reading experience was similar: non-fiction personal exploration. It’s only recently I’ve dipped back into the realm of the unreal, but with Mom’s passing and the subsequent depression associated with grief, this booklet called out to me. I wanted to change my outlook toward the circumstances in which I felt trapped. I already knew how to unplug from the negative and into the positive (which I wrote about here), now to further implement that idea.

But first, some background on the book and its author. The book was published in 1902, therefore it was written in turn-of-the-century-speak, if you know what I mean. It’s a heady little read, each sentence requiring a bit of chewing and tasting, chewing and tasting, like a cow in a grassy pasture contemplating the meaning of life, but to be truthful, I eat those up. I’m in love with authors from that era. Take this sentence, for instance, which is an excellent example of some of the verbage:

Only by much searching and mining are gold and diamonds obtained, and man can find every truth connected with his being, if he will dig deep into the mine of his soul; and that he is the maker of his character, the moulder of his life, and the builder of his destiny, he may unerringly prove, if he will watch, control, and alter his thoughts, tracing their effects upon himself, upon others, and upon his life and circumstances, linking cause and effect by patient practice and investigation, and utilizing his every experience, even to the most trivial, everyday occurrence, as a means of obtaining that knowledge of himself which is Understanding, Wisdom, Power.

Whew! That’s a mouthful. Since the author, James Allen was born in England, some of the words, such as pothouse and gaol, threw me and I had to look them up. And viands—who uses the word viands for food? But I digress…it’s a thought-provoking booklet, nevertheless, even with some of the British and archaic vernacular.

The essay is broken into seven sections (greatly summarized below):

Okay, so I’ve thrown out a few catchy quotes…big whoop. What’s it all mean? It means you should’ve had a taste tantalizing enough to run to the trough, because frankly, this tiny volume delves into the basic truths of positive thinking so deliciously you’ll relish every bite like the squealing, suckling-for-knowledge little piggie you are.

And as of this writing, if you own a Kindle (or e-book, I think, but I’m not really sure how that works with Amazon) you can get As A Man Thinketh for FREE! Yes, you read that correctly. In my search for a cover picture, I went to Amazon and saw it was being offered au gratis—just follow this link. There are other versions for less than $1.00, and while there, I one-clicked As A Man Thinketh Deluxe Collection of Five Favorite James Allen Works [Annotated and Unabridged] for 99¢. I love a bargain!

I highly recommend this booklet. If you’re on the journey of personal development, it’s a must-have. And as always, the better a writer knows the thoughts that govern human behavior, the deeper he can go into character development and POV. The foreword of the essay makes a good place to end this post:

[As A Man Thinketh] is subjective rather than explanatory, its object being to stimulate men and women to the discovery and perception of the truth that—”They themselves are makers of themselves”—by virtue of the thoughts which they choose and encourage; that mind is the master weaver, both of the inner garment of character and the outer garment of circumstance, and that, as they may have hitherto woven ignorance and pain they may now weave in enlightenment and happiness.

For a variety of other reviews and thoughts from our members, click the frog’s head below for the link list. The selections are as diverse and exciting as their readers! And as always, we are open every month to new participants. For more information, go to the Progressive Book Club Guidelines in the tabs at the top of the page.

The Progressive Book Club meets the third Wednesday of each month. If you’d like to know more, click on the badge to link to the guidelines. Any book is welcome, and we’d love to have you—the more participants and titles, the greater the likelihood one will resonate with our readers. Hope to see you next month!

ML Swift is a writer of Middle Grade, Young Adult, and Adult fiction, although he dabbles in many genres.

An Alzheimer’s caregiver for the past ten years, he has published several articles on The Alzheimer’s Reading Room, the largest online website catering to that community, and plans to write a novel about his experience in caregiving.

He resides in Florida with his dogs, Rameses and Buster, attempting to reclaim his side of the bed.