What if there were no computers or typewriters? No Backspace key, no Delete button, no Wite-Out, nor erasers? Merely pen and paper.

When you made a mistake, you’d ball up the paper and toss it in the trash, right? But after going through a whole thicket of Pine trees and finding your change purse empty (as well as having a guilty, wasteful conscience), you’d eventually scratch out the errors and continue forward. 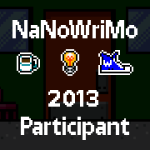 That’s the basic concept of National Novel Writing Month: trudging onward in spite of your mistakes—writing with complete literary abandon.

To paraphrase Anne Lamott in Bird by Bird, the first draft—the result of NaNoWriMo—is the downdraft. You simply get it down. Making mistakes, e.g., plot holes, tense inconsistencies, POV issues, poor word choices, grammar problems, etc., is all a part of the first draft experience. After the month is over, carry no delusions you’re sitting on the finished 50,000-plus-word Great American Novel the world has eagerly awaited, because believe me, you’re not.

Anne continues with: “the second draft [after NaNovember is all said and done] is the updraft.” That’s the time to spruce it up; you clean house and make it suitable for company. Now your manuscript is ready to self-publish, or for querying agents, editors, and traditional publishers, correct? Again—not. Where’s the smell of apple pie in the air? Have the dogs had a bath? Is that a piece of spinach in your teeth?

Thus, the third revision: “the dental draft, where you check every tooth.” It’s time to break out the editing floss and do a line and copy-edit: go sentence by sentence, word by word and—dare I say?—bird by bird.

Now is my NaNoNovel ready to go? Once again, the answer is no.

All three of those earlier edits were performed by you, the author; now it’s ready for “pre-public consumption.” Those are my words, not Anne’s. Look for honest and gently brutal critique partners, then after their revisions, scout out beta readers to do the same. Revise and rewrite according to your heart, but thoroughly consider their suggestions with an open mind. Then expect more suggestions from your editor and possibly others. Again, revise and rewrite according to your heart.

In my opinion, all paths to publication require the steps listed above; anything less would compromise the integrity of your work.

My novel from last year’s NaNoWriMo still sits in the revision stage, with much work left to do, as it is a part of a series. I’d like to plan the remaining four books before continuing any further, therefore, it won’t see the light at the end of the publication tunnel for a long time.

This year, I entered NaNovember with the half-hearted goal of completing a first draft. It had been an unusually crappy year, which affected my desire to write, however, with the encouragement of friends and supporters, I threw my baseball cap into the ring.

NaNoWriMo was exactly what I needed to provide the motivation to write a novel-length work again. Do I expect to finish? No way! By the first week’s end, I had hardly written a single word—albeit, a decent first paragraph—for there had still been too many outside obligations which demanded my attention.

Now, midway through the second week, I’m a few thousand words into When Panda Smiled and the year seems less crappy. A self-professed slow writer (editing along the way is my undoing), November’s yearly event helps put Anne’s “downdraft” suggestion into practice.

The point is, a novel can be written in a month and slapped up on Smashwords’ latest release shelves by December first—just in time for Christmas—that is, if you’re dead-set on releasing a mediocre (if not worse) novel. A good novel takes months, sometimes years before it sees completion.

To all participating in this year’s event, cheers to you in the completion of your goals, whatever they may be, but for those who have an idealistic approach to NaNo, or to the publication world in general, I encourage you to consider this more realistic outlook. Trust in the process. You’ll thank yourselves later.

And who knows? A couple of killer marathon days under my belt—after all, I am good at saying a lot about nothing—and I may even complete that 50K+ word novel.

At least the first draft.

ML Swift is a writer of Middle Grade, Young Adult, and Adult fiction, although he dabbles in many genres.

An Alzheimer’s caregiver for the past ten years, he has published several articles on The Alzheimer’s Reading Room, the largest online website catering to that community, and plans to write a novel about his experience in caregiving.

He resides in Florida with his dogs, Rameses and Buster, attempting to reclaim his side of the bed.

60 thoughts on “The NaNoWriMo Misconception (The Book of Delusions 20:13)”