I really enjoy Alex’s blogfests. I also enjoy movies…and when the two are combined:

Whoa. Did we really dress like that? Yes. I had shirts very similar, except in brown … and green … and mauve. This is such a dated commercial with the Walkmans and the over-the-hair headphones that doubled as earmuffs. And is that an open crock of peanut butter the girl is carrying down a crowded sidewalk? Who does that? She was just asking for chocolate to crash-land in her peanut butter. Or a big ol’ dollop of bird crap. But I digress…we’re talking movies today, not peanut butter and poop. 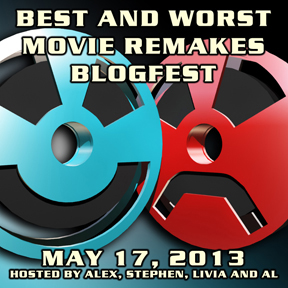 Thanks to Alex Cavanaugh, Al Diaz, Stephen Tremp, and Livia Peterson for hosting The Best and Worst Remakes of Movies.

For a full list of the participants, give their links a click. As for me, I’m anxious to find out what their and everybody else’s picks are. The varying viewpoints should prove interesting.

Hmmm…this was rather difficult. Not the worst ones—they’re a dime-a-dozen—but the best ones. I was hard-pressed to come up with any, until I narrowed it down to a couple of movies by director Alfred Hitchcock.

Hitchcock is one of those great directors who, if you’re going to reshoot one of his films, you’d better do a fantastic job. His movies were perfection, with no real way to top them, only to make them different (someone should have given a heads-up to Gus Van Sant, whose version of Psycho was a scene-by-scene, camera-angle-by-camera-angle rip-off of the original—BAD idea).

Hitchcock also knew how to choose the leading ladies. Both of the films I’ve chosen showcase Grace Kelly, the epitome of elegance and style. I’ve always had a thing for GK.

So without further ado, I’ll administer the medicine first (that would be the worst remake), then the spoonful of sugar to help it go down (and that would, of course, be the best).

This 1954 masterpiece starring James Stewart, Grace Kelly, Thelma Ritter, and Ironside (Raymond Burr) exemplifies movie-making at its best. I originally watched this when I was 21 and the constant suspense kept me on the edge of my seat the entire time. There is no cussing, no sex, no special effects…just good acting and great story. A must-have for any video library worth its salt.

Watch the three-minute clip by Tom Lucas for an excellent analysis of the movie. Did you know that people actually study the intricacies of this film in the same way we study the nuances and plot points of a great novel? Actually, it would behoove any writer to do the same for a better understanding of how to handle suspense and conflict, romance and humor (Thelma is priceless!). Listen to what Tom has to say:

Then there’s the 1998 remake, starring Christopher Reeve and Daryl Hannah. I’m sorry. Maybe I don’t like it because they up and frucked with one of my favorite movies, but it paled in comparison. They added sex, flesh, violence, and all the flash of modernity, but lost the real suspense. The story suffered for the sake of sensation.

I understand that it was a vehicle for Christopher to shine after his riding accident, but the story didn’t play as well with a quadriplegic in the role. While Jimmy had a broken leg, his other abilities were unhindered, so he could do more and act more and fight back…more.

Unfortunately, Christopher didn’t have this luxury, so much of the film was full of holes and implausible scenarios that had me screaming at the screen. Plus, when watching, I couldn’t help but think, “Oh, it’s so good that Christopher has a new movie. Poor thing…not much out there in the way of roles.” In other words, it was hard to separate the character from the real person. It kept taking me out of the action. And Daryl Hannah is no Grace Kelly.

But if you want to do a Hitchcock remake right, then take a gander at this original and its successor:

Another 1954 outing of Hitchcock’s, and another suspenseful tale without all the sex, violence, and rock and roll. Watch the scene:

Now compare that to a similar scene from 1998’s remake starring Michael Douglas and Gwyneth Paltrow:

Yeah, I know…this does have all the sex, violence, and rock and roll (with the addition of Viggo Mortensen) but it is all done damn well. Great casting, realistic updating, and the suspense of the story was never compromised. Both were excellent, with period-appropriate language and degree of turmoil.

When once asked what makes great suspense, Hitchcock thought for a moment, then replied,

There is no terror in the bang…only in the anticipation of it.

I think most remakes in general concentrate on adding to the bang instead of focusing on the anticipation, and that’s where they fail. What good is the shock and awe and fillers of newfangled flash when there is no story to back it up? There is none.

And that’s that. I hope you enjoyed my offering, and be sure to go around and check out all the other participants of the fest!