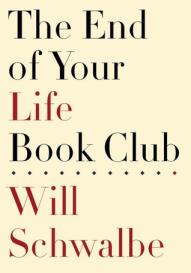 We will all be members of The End of Your Life Book Club at some point in our lives.

Perhaps we will be Will, a devoted son who spends that all-important quality time with his dying mother, or perhaps we will be Mary Anne, a strong, vibrant woman coming to terms with her own mortality, but either way, the book club has an empty chair waiting for all of us.

This, I know. I belong to that club.

At the time of the Progressive Book Club’s inception, I had a shelf-load of books on writing and a few memoirs that I wanted to get through. Reading two craft books and a memoir every quarter with a group of fellow writers seemed like a great way to do it.

But this book, The End of Your Life Book Club, was not on that list. I had never even heard of it.

One day, while fooling around with my new Kindle, the book simply fell into my lap, so to speak, as if it were meant for me to read. I was learning the ropes of my e-reader and came upon the e-loan program sponsored by my local library, and there it was, available and waiting to be my first download. Needless to say, the subject matter interested me and I checked it out.

The loan period was for two weeks, which is normally plenty of time for me to wolf down a 300-page book, but during that time things were hectic, and I was only able to read through the first quarter of it. I loved it, and ordered my own copy through Amazon. It was my story, or at least a reasonable facsimile, being told by someone else.

Of course, being the opening-line freak that I am, when I began to read, I couldn’t help but take note of that first sentence. Although I was planning to peruse this in more of an “enjoyment” rather than “study” mode, the first sentence has always been something that will make or break a book for me—and I was nuts about it.

“We were nuts about the mocha in the waiting room at Memorial Sloan-Kettering’s outpatient care center.”

It was so simple, yet so revealing. That one line told me of the personality of the narrator (we were “nuts” indicated a relaxed playfulness, as opposed to “we liked”), it told me of the setting (a hospital), the severity of the situation (cancer, from the knowledge of Sloan-Kettering), and the frequency of visits (enough to know what the best coffee is). Somebody in the family was facing terminal cancer.

That’s what makes a good first sentence, in case you wondered.

And then a funny thing happened at the beginning of chapter two—an audible laugh escaped my lips—and that doesn’t happen too often.

“Mom and I loved opening lines of novels.”

Mom and I have always been voracious readers, devouring books like children scarfing back candy, but over the past few years, that appetite has waned immensely. With her diagnosis of Alzheimer’s six years ago, Mom’s ability to follow or understand a book has diminished, and now the best that she can do is muster through the weekly newspaper.

To her, it’s a daily paper—the news is always…new. She’ll point out an event, a story about the Sopchoppy Worm Gruntin’ Festival, and say, “We should go to that this year,” then flip through the pages, read aloud the Sheriff’s Report, and make a remark about the woman who walked out of WalMart with a 52″ flatscreen (“Can you believe that?”).

A few minutes later, she’ll glance at the article about the Sopchoppy Worm Gruntin’ Festival again. “We should go to that this year.”

“Perhaps…if the weather’s good,” I answer back, as if it were the first time she had said it.

Needless to say, we don’t read as much anymore. Instead, we watch movies. They take less time, and Mom seems to keep up a little better, even though I have to explain the plot or re-introduce the characters every now and then.

Our list of movies is as prolific as Will and Mary Anne’s selection of books. As I laughed over their discussion on the silliness of Brat Farrar, with Mary Anne calling the “surprise” ending predictable—even if she hadn’t read the ending first—I empathized with Will, who “just liked it.” Mom and I have those disagreements about our film choices all the time.

I’m never really sure what Mom will be in the mood for, but she’s usually not too big on comedies, which I am. “This is stupid,” she huffs.

“Give it time, it’ll get better.” I attempt to coax her through the complaints before reluctantly giving up and scanning the guide for another movie. Ironically, she likes deep and thought-provoking films, but needs me to be there to answer questions. As I explain, we end up heading down a different road altogether by discussing things that are on her mind or bugging her—a cousin’s passing, or how we need to find her wedding ring.

Mom was recently in the hospital for five days—an exhausting five days for the both of us. One Thursday afternoon, she went into respiratory distress due to the heavy pollen this year and was taken by ambulance to the hospital, with my sister riding along to keep her company. I followed in the car close behind, but by the time I arrived, she was in tears wondering where I was.

My heart broke in that moment and I didn’t leave her side for the rest of her stay.

The forced oxygen of the CPAP mask that Mom wore was loud, not to mention the alarm that went off every time she tried to adjust it. On top of that, the recliner in which I slept was as hard as cement and kept dropping down from full to half-recline. KLUNK! I didn’t experience an REM for five days, although at one point, I did doze for a few winks in her bed while she read the paper in the chair.

So by the time I reached the final chapter, Too Much Happiness, where Mary Anne was in the hospital breathing her last, I had somewhat just been there. Of course, our outcome was different for the moment, but my heart knew the feelings. I had much difficulty getting through that chapter.

And then, after the epilogue, I closed the book and heaved a tearful sigh, preparing for the journey ahead.

I realize that this isn’t your typical book review. As a matter of fact, it’s not a review at all—but then again, book clubs, like Will and Mary Anne’s, are not about reviewing books. They’re about having meaningful discussions on how each book made you feel…what you walked away with after being in someone else’s skin. They’re about spending time together and reacquainting yourselves at a deeper level.

Will wrote about that magical point that happens with only the very best books, when one becomes absorbed and obsessed and enters the “Can’t you see I’m in reading mode?” For me, it occurred with that very first, wonderfully expressive line. I told you it would make or break a book.

I can’t wait for the movie.

This post is part of the Progressive Book Club, which is held on the third Wednesday of each month. Join us as we study books on the craft of writing, with the occasional memoir or fictional novel added every third month.

get the InLinkz code