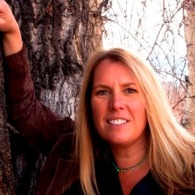 Back at the beginning of March—the fifth, to be exact—I left behind my Blogger website and made my first official post here at WordPress. Up to that point, I had been double-posting my Blogger articles, but that one laid the milestone that confirmed my move was complete. There has been no turning back, and I’ve been loving it here.

Yeah, WordPress is a little different with a lot to learn. I’m managing.

In that first post (which was also the last post at Blogger), I wrote of my plans for the immediate future and how this blog would handle blogrolls. In an update from WordPress, I was notified that they would eventually be getting rid of the typical blogroll, so I decided to take appropriate measures.

I hurriedly created a “My Tribe” tab, slapped up sites that were currently on my blogroll and called it a day until I could get to it later. Today is the first day of later. I’ve deleted those earlier pages of the “My Tribe” tab, have opened a new page titled, “Writer’s Blogs—Individual,” and will be adding you one-by-one, in no specific order or preference—except for this one.

This one has special meaning to me. This one spotlights my good friend, Julie Luek, of A Thought Grows, the first blog I followed. 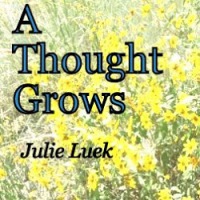 Julie and I met…goodness, over a year ago…on a weekly prompt board and became immediate friends. She has some real talent, and I wanted to know the person behind those wonderful short stories I so enjoyed.

We cheered each other on, always being honest in order to grow into the writers we wished to become. That included honest criticism along with the Rahs, and I’ve always been grateful.

I knew Julie had a blog, but didn’t realize at the time what blogs were. I thought they were more like personal diaries written online for all the world to see (and some are), never comprehending that all the “websites” that I had been reading and gleaning were actually blogs. To show how many changes have happened over that period of time, I was using the pseudonym, Chris Michaels—too scared to put my real name out there. My, how I’ve grown.

Another sign of growth, this time hers, was the small number of followers she had at the time. I think I was number five or so. That has certainly changed! And it has been because of her genuine warmth and encouragement towards the writing community, in addition to the well-written topics she addresses in such a professional manner.

At the time, I had made one paltry post on my caregiver’s blog before deciding that I needed to learn much more about this online world and the writing business. Julie encouraged me to rekindle that blog, which I did in October. I know she had to get sick of my constant, “How do I’s?” I eventually split my blog into two individual sites.

I follow Julie because of the above, but also because she fits into what I’m looking for in a blog:

And now she’s forked off in several different directions. She is a frequent contributor to She Writes, is a member of the Rocky Mountain Fiction Writers, contributor to their blog, Chiseled in Rock, and also finds time to author another more personal blog about life in a secluded mountain hamlet fittingly called, In Fine Company. Add to that all the articles for various print publications, and I need rollerblades to keep up with her!

This year that I’ve known Julie has seen us weather many sunny days, as well as a few that have been dark and grey, but I know that whenever I’m with her, I’m always in fine company. It’s an honor to call her a fellow writer and friend.

56 thoughts on “Spotlight On: Julie Luek of A Thought Grows”