“I have always depended on the kindness of strangers.”

Have you ever depended on the kindness of strangers?

As this year’s Super Bowl teams battle, I am reminded of the tradition started at my church in San Diego back in ’98, the year the city played host to XXXII, and wonder if it still continues. 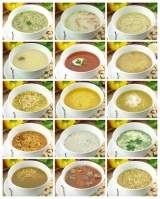 Churches are always looking for more wholesome ways to celebrate events that are usually associated with excess and drunkenness, although there’s nothing wrong, in my opinion, with having a good time—or drinking, for that matter—when done in moderation. However, on too many occasions a good time wasn’t had by all due to the overindulgence of those who didn’t know when to say, “When.” Believe me…I’ve been one of them.

So to share in the city’s excitement of the event (and always looking for new ways to raise funds), I brought up the idea of throwing a “Soup”-er Bowl Party, where we’d set up a big screen TV in the fellowship hall, sell tickets, and have the congregants bring their favorite soups to create a more family-friendly sports “bar.” Super Bowls were held in January at the time, which coincided with National Soup Month (yes, there is such a month), so it all came together like Mulligan Stew. 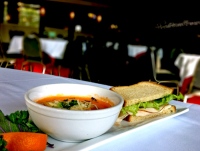 The event went off seamlessly, with everyone sitting around, watching the game, and finding comfort in friendly rivalries, hot soup, and sandwiches. We had sold so many tickets, that we had to set up several televisions throughout the hall, eventually spilling into the courtyard. Fortunately, San Diego is blessed with pleasant weather, even at the end of January, and a few towering space heaters took the chill off the air more than sufficiently.

But San Diego, with its blessed weather, is also cursed with the problem of every big city—homelessness. In my lifetime, I’ve constantly tried to provide comfort to those less fortunate without enabling, because I know that, whether my efforts are successful or not, there but for the Grace of God go I. 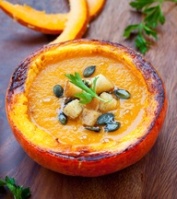 Through the years, I’ve learned that the best way to make sure a soul eats is to give them food, not money, because for some, the call of addiction is too strong and they will forego a meal if given the choice that a few bucks provides. It is not my place to judge, but to help.

Well, the party was in full-swing, and the rattles of dishes and sounds of conviviality eventually began to draw a few hungry onlookers, who were invited in with open arms to join in the celebration. We had more than enough, with the soup seeming to multiply like the fishes and loaves, for as soon as another person would file through the front door, another stockpot of hearty vegetable would be brought out the kitchen door.

It was one of the most heart-warming days I’ve had, all due to giving  a steaming bowl of kindness to a stranger.

The reason I bring this up today is that, over the course of the afternoon, while watching all the various news programs and learning the financial statistics on the game, was appalled by the outrageous excess of the event. That both people and companies would demand and pay such marked-up prices is a tragedy. Yes, there should always be time for fun and games, but look around, people—there are more important things to spend your $3000 on. Give your money to a worthy cause and watch it on the tube.

Sometimes I wonder what the equivalent of that is in bowls of soup—how many meals and warm blankets that would provide. For four hours of fun.

Believe me, I could really throw down my soapbox on this topic, but for now, I merely wanted to put a bug in your ear on the subject. How can we bemoan our problems when such extravagance is lavished all around us, in politician’s salaries and expenditures, as well as our own?

Although it is too late this year to start your own tradition of throwing a yearly “Soup”-er Bowl Party and opening up your dining room to the streets, it’s never too late to get involved in lending a hand to the less-fortunate. There are soup kitchens and organizations nationwide that need your help.

To volunteer in your area, go to FoodPantries.org.