On a cold, early-December evening in 1971, our sunken den was transformed into an arena of testosterone-driven action as my brother and I fought repeated battles of Rock ’em, Sock ’em Robots.

Grunts of victory and groans of defeat drowned out the crooning of Mom’s favorite seasonal LP, The Andy Williams Christmas Album, as it belted out a new classic from the wooden stereo console: 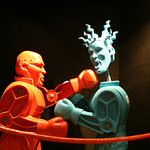 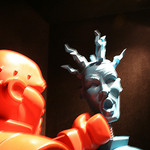 KNOCK HIS BLOCK OFF!

It was a quote using the curious phrase, “If I were…,” which sounds wrong, but is absolutely correct. Correct? I were instead of I was? Say it ain’t so! But it is.

Since I learned this technique from the Cowardly Lion, this lesson is called, “The Courageous Case of If, Was, and Were.” We sprang for nothing but the best in my attainment of an education!
The subjunctive mood, like much of the English language, has almost been butchered into non-existence. It is used in statements where the mood of the verb is speculative.
Mood of the verb? What’s that mean? In this case, the way a verb is used when applied to hypothetical statements, as in the Lion’s recitative:
“If I … were king … of the forrrreeessst,
not prince … not duke … not earl.”
And most importantly – not was.
According to traditional thought, the subjunctive verb, “were,” is always applied when discussing statements on the conditional future, although it’s much more common to find the (non-standard) use of “was.”
But just because everybody’s doing it doesn’t make it right (yet another quote and lesson I learned from my parents around the same time).
The other pronouns, “you,” “he,” “she,” and “it” follow suit and use “were.” “We” and “they” definitely use “were,” as they are plural and “was” would be non-standard.
If I were you and was facing this dilemma (notice the two different, correct uses of the verb), I’d simply remember the song Bert Lahr taught us.
The Big Cat had it right.
~~~~~~~
What is a grammatical road block that you’ve faced, and what specific instance can you remember that finally taught the lesson? What tricks do you use to figure out quandaries like this? Where were you when Kennedy was assassinated? Bacon and eggs or pancakes?
Peace,
ML

32 thoughts on “How The Cowardly Lion Taught Me Grammar”